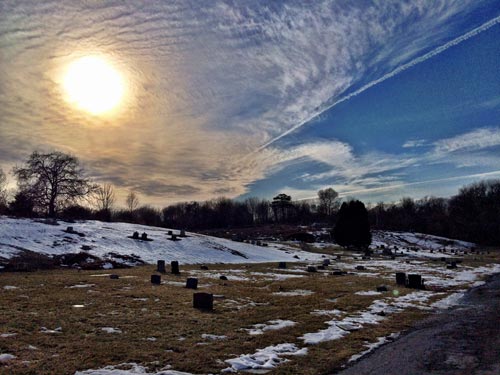 Mount Moriah is a cemetery in southwest Philly that spans across Cobbs Creek river into Yeadon, PA. The cemetery is massive and parts of it are just beautiful. It’s an historic Philadelphia landmark that has been neglected by the city and has no real owner. When we first arrived we started on the Yeadon side which looked well kept. As we walked further in we started to see areas that were so overgrown you couldn’t see the headstones.


From a distance we saw smoke and a random car parked way into the cemetery. We decided to check it out and met a three women who were part of the Friends of Mount Moriah Cemetery who gave us a map and told us about the city’s neglect for the landmark and how they were helping. I would love to go back here to help with a restoration day.

There was still a good deal of snow in certain parts and where there wasn’t snow there was lots of mud. We headed over to the Philadelphia side which had a much different feel. When you’re on this side you can see the surrounding neighborhoods and it has much more of an urban feel than the other side.

Some of the neighborhoods you have to drive through are a little sketchy and the women we had met told us a few stories of stolen cars being driven into the cemetery and left to burn. It’s wonderful to know there are people who are committed to the upkeep of this Philadelphia gem with so much history. The friends of Mt Moriah cemetery does a great job listing some of the historic figures buried here. It’s definitely worth a visit.